Friday morning I woke up early from jet lag, and just when I was about to fall asleep I got a call that we'd gotten word that we would be coming down soon. We turned off our instrument and prepared for cutdown. Since the concern was the poor terrain to the south, we got a few extra hours of flight when our trajectory turned north, and we sent the commands to turn the instrument back on.

Just as I was leaving to go stop by the department and say hi to people and go to our Graduate Student Seminar talk, we got another flurry of emails to turn off the instrument. This time, we ended up starting to come down about 45 minutes later.

The process of termination is pretty cool--helium gets vented from the balloon, the balloon is ripped so it comes back down, the payload falls, and then a parachute is deployed. After we hit the ground, the parachute detaches (TIGER 2001 had some issues with this step), and the instrument is on the ground. 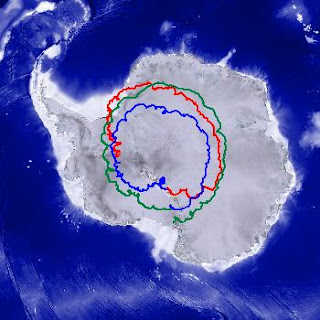 I plan on updating the blog at least once more with the details of the (very unlikely) recovery operations this year, if any.
Posted by Ryan at 5:21 PM